Beauchemin-Pinard in the Top Ten 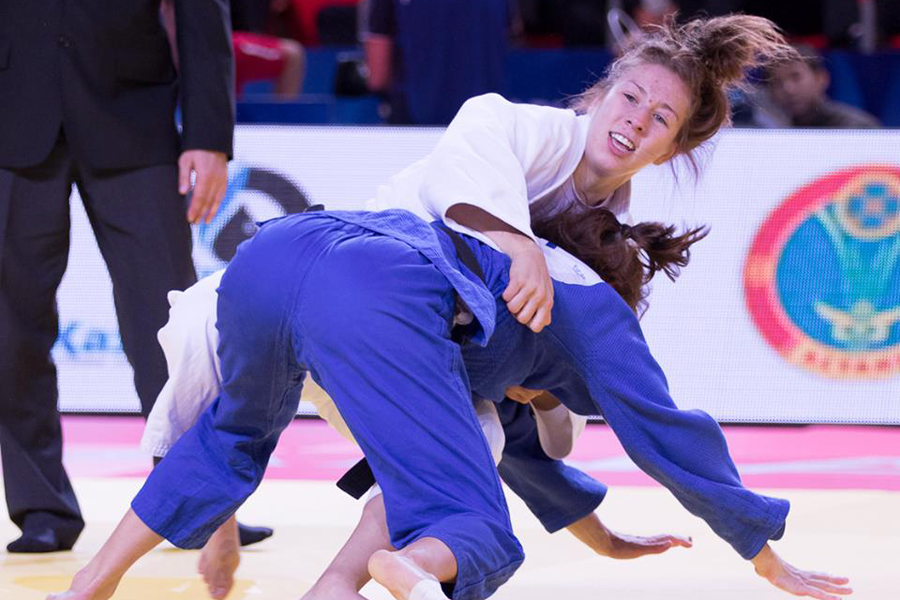 Montreal, February 6, 2016 – This weekend, Canadian judokas are participating in an important competition, the Paris Grand Slam, in their quest to qualify for the Rio Olympic Games. Quebec athlete Catherine Beauchemin-Pinard, from Saint-Hubert, is the Maple Leafer who has gone the furthest this Saturday, finishing seventh in the Under 57 kg.

Catherine Beauchemin-Pinard’s day started well, with a victory by ippon over Swiss Emilie Amaron, 39th in the world. She then beat Kosovo’s Nora Gjakova, 23rd, by waza-ari.

“I took the first two fights one at a time, because if you lose, you’re out,” said Beauchemin-Pinard, eighth in the world. “Even though they were not as strong as me, I took them seriously and applied the strategies I have against them, as we’re often up against each other.”

However, things took a turn for the worse for the Quebecoise in her last preliminary fight, and the 21-year-old lost to Brazil’s Rafaela Silva, 14th, by ippon and waza-ari.

“You have to have a lot of patience when you fight her, because all she ever does is counterattack. I tried a bunch of little attacks to get the points, but after one of my moves, she had me in an armlock. It all went down pretty fast!”

In repechage, she was defeated by French Automne Pavia, 12th, with two yuko. She finished the competition in seventh place in the Under 57 kg division.

“Right now my days are neither good nor bad, but I would have liked to make podium,” she added. “I’m happy with my fight against the French girl, because it was the first time I was up against her. It was a good opportunity because of the Olympic Games.”

She admits she still has elements to work on when she is up against her opponents, but is very confident in the near future. “I’m well positioned for Rio. The hardest is behind me, because I’m pretty sure I’m going to make it to Rio, but my objective is to be in the Top Eight.”

Competing in the same weight class, Whitby’s Jessica Klimkait was shown the door in her first match, against Polish Arleta Podolak, who beat her by ippon.

In the Under 52 kg, Montrealer Ecaterina Guica, 31st, came in ninth in the competition, with a record of one win and one loss. She won her first bout by ippon over Armenian Zhanna Stankevich, 33rd. In her second match, the 22-year-old came up short against Kosovo’s Majlinda Kelmendi, third in the world, who defeater her by scoring a waza-ari and an ippon, on top of getting Guica to take three penalties.

Saguenay’s Stéfanie Tremblay had a short day in the Under 63 kg. She lost her only match, against Turkish Busra Katipoglu, with one penalty against none for her opponent.

Montreal’s Arthur Margelidon, 24th, had the best performance among Canada’s male athletes. He finished 17th at the end of the day, with a log of one win and one loss in the Under 73 kg.

The 22-year-old won his first match by yuko, on top of the three penalties he got his opponent, Turkey’s Hasan Vanlioglu, 30th, to take. Unfortunately, he went on to lose his second bout to China’s Shuai Sun, 33rd, by one penalty’s difference.

“I had a good first fight, I was in control,” said Margelidon. “Then I took two shido while the Chinese took just one. He was on the defence a lot, and I should have taken more risks. I wasn’t able to impose my judo and keep him away.”

The Quebecer will be doing some technical fine-tuning in his upcoming training camps. “I can always do more. You’re never the best athlete you can be. There’s always room for improvement, but I’m on the right track.”

David Ancor, from Montreal, was also competing in the same weight division, but he was stopped in his very first match by France’s Pierre Duprat, who scored an ippon in a mere 17 seconds.

In the Under 60 kg, São Paulo native Sergio Pessoa had a similar fate. The 27-year-old lost his first preliminary match by ippon and four penalties to France’s Sofiane Milous.