Jacob Valois Stands Out with Seniors 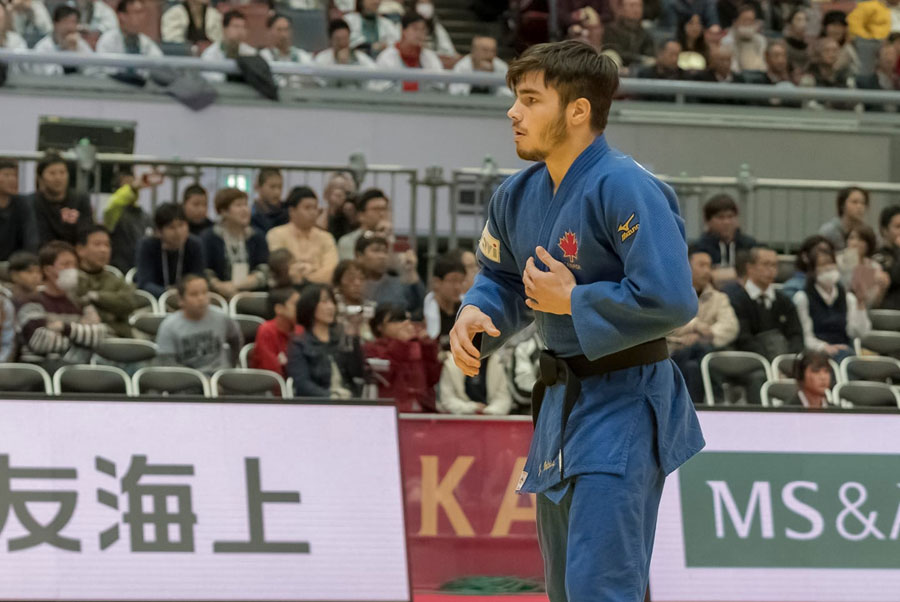 Montreal, February 16, 2019 – Jacob Valois has been competing as a senior since January. After only two months, he’s standing out and proves he’s a contender for the podium in the -66 kg category. He placed seventh during the European Open in Rome, in Italy, on Saturday.

The Bouchervillois saw his day end in repechage, where he lost by waza-ari against Italian Mattia Miceli, who won the bronze medal.

“I know my potential, and the medal was within reach. I made a small mistake at the end, I stayed in place too long. I did the same thing at the Paris Grand Slam last week. I think I can go far if I manage to fix that mistake,” said the 20-year-old.

National team coach Jean-Pierre Cantin is very proud of his protege and agrees with him.

“Jacob could have won his last two fights, but he injured his knee. In the last one, he was ahead until 10 seconds from the end. After that, his opponent scored, and he couldn’t move. He has a big contusion and maybe stretched his ACL. It’s a shame; after winning that fight, he would have been in the bronze-medal final, and anything was possible.”

In the preliminary rounds, Valois defeated French Alexandre Mariac by ippon and Russian Mirzoiusuf Gafurov by waza-ari. The Quebecois then lost the quarterfinals against Spanish Daniel Perez Roman, who won by ippon and went on to win the bronze medal.

“I could have done better if I hadn’t injured my knee against the Russian. But I really learned a lot during my last month on the road, and I know I’m coming back home stronger,” said the judoka.

“Last week, at the Paris Grand Slam, he scored 2 wins and 1 loss, and the week before, he won the bronze at the International Belgian Adidas Judo Open. It was a great tour for him, and an excellent start as a senior,” added Cantin.

The other Canadians didn’t get a ranking. In -73 kg, Ontarian Bradley Langlois scored one victory and one loss, and Saskatchewanian Warren Seib and Montrealer Constantin Gabun were eliminated after their first bout.

None of the Canadian women got a ranking at the Oberwart European Open, in Austria. British Columbian Shianne Gronen (-78 kg) had a score of one victory and one defeat. Montrealer Marie Besson (-52 kg), Albertan Hanako Kuno (-70 kg) and Baie-Comeau-native Mina Coulombe (-78 kg) were eliminated after their first fight.

“It was a difficult day for the Canadian team. Only one athlete went past the first round. The level of competition was very high, with many athletes being high in the world ranking. Our team is young, and they need more experience at the international level. They all fought hard, but they have things to work on,” commented assistant national coach Sasha Mehmedovic.

Over 500 athletes from 25 countries were gathered for the Cadet European Cup in Fuengirola, in Spain, this weekend. Saturday, Albertan Emilija Ema Tesanovic (-48 kg) placed fifth.

The judoka from Calgary won her three fights in preliminary rounds before losing the semi-final against Portuguese Raquel Brito. During the bronze-medal bout, German Jule Ziegler had the upper hand.

In -66 kg, Félix Archambault, from Sainte-Hyacinthe, scored 2 victories and 1 loss, while Emil Schenk, from Alberta, won his first fight and lost the second. Albertan Nathan Demaere was eliminated in the first round.

In -60 kg, Ontarian Daniel McCristall was the only one to win a fight before being eliminated. Saskatchewanian Maximus Litzenberger and Albertans Braden Dixon and Seth Nobert were defeated in the first round.