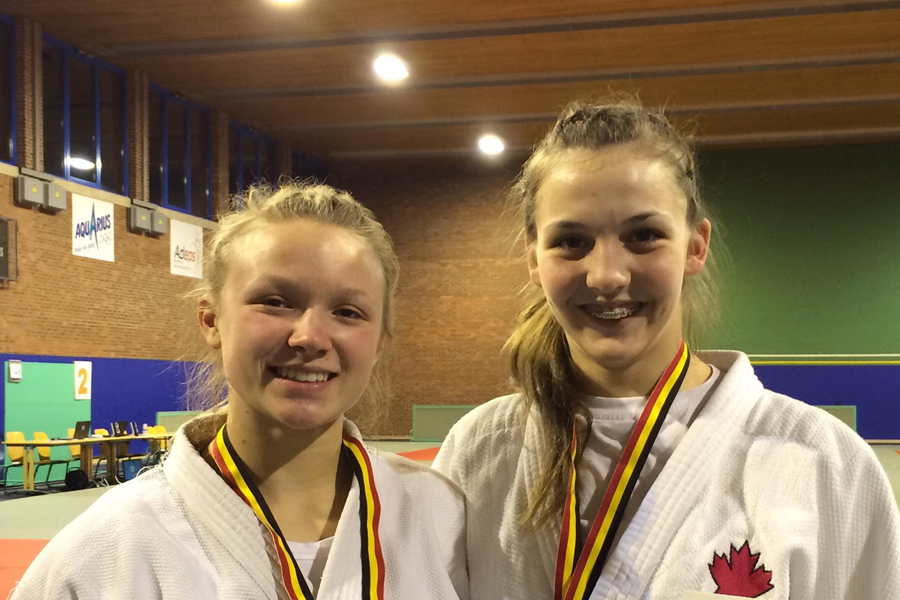 Montreal, January 31, 2016 – Ontario judoka Jessica Klimkait finished a gruelling 12-match weekend on the second step of the Under 57 kg podium at the Arlon Judo Open, in Belgium.

After winning five fights on Saturday to be crowned under-21 champion on Saturday, Klimkait lined up another six victories in the 21-and-over category on Sunday. French Lola Benarroche was the only one who managed to stop the Whitby athlete, the final match.

“Even though I lost the finals in seniors, I still think I had a strong two days of competition and a good start to 2016,” said the 19-year-old Canadian.

“She had a perfect day up until the finals, and then lost by yuko,” said Jean-Pierre Cantin, national coach for juniors and cadets. “I am really happy with her performance. She had an excellent weekend, and she’s a true warrior!”

Emily Burt also put her hands on a medal – she came in third in the Under 63 kg. The Oshawa athlete won five of her six bouts. “These are excellent results, a sublime performance!” said Cantin. “She showed an excellent attitude and the qualities of a champion.”

Marie Besson ranked seventh in the Under 52 kg. The Dolbeau-Mistassini athlete won one match and lost three. “She fought with grit and determination, in spite of a few injuries along the tournament,” said the national coach.

Second in her group in the Under 70 kg, La Prairie judoka Adriana Portuondo Isasi lost in the first round of the eliminatory round and repechage. In the end, she won a match, lost three, and came in ninth.

“It was a good day for Adriana, because it’s only her second tournament after a shoulder surgery last summer,” explained Cantin.

Erin Morgan, from Canmore, and Laurence Thiffault, from Saguenay, fighting in the Under 48 kg, and Briana McCracken, from Whitby, competing in the Under 52 kg, did not make rank in the competition.

Meanwhile, at the Vise Judo Open, the others five Canadians did not make rank in the competition. Andriy Romanov of British Colombia had the longest working day, losing in the repechage in the Under 100 kg. In the end, he won two matches and lost two.

Gueorgui Poklitar (Under 66 kg) and Louis Krieber-Gagnon (Under 90kg), both from Montreal, and Olivier Gobeil-St-Amand (Under 81 kg), from Champlain in Mauricie, won each of them one match and lost one. On the other hand, Laval judoka Marc Deschênes (Under 100 kg) lost his only fight.