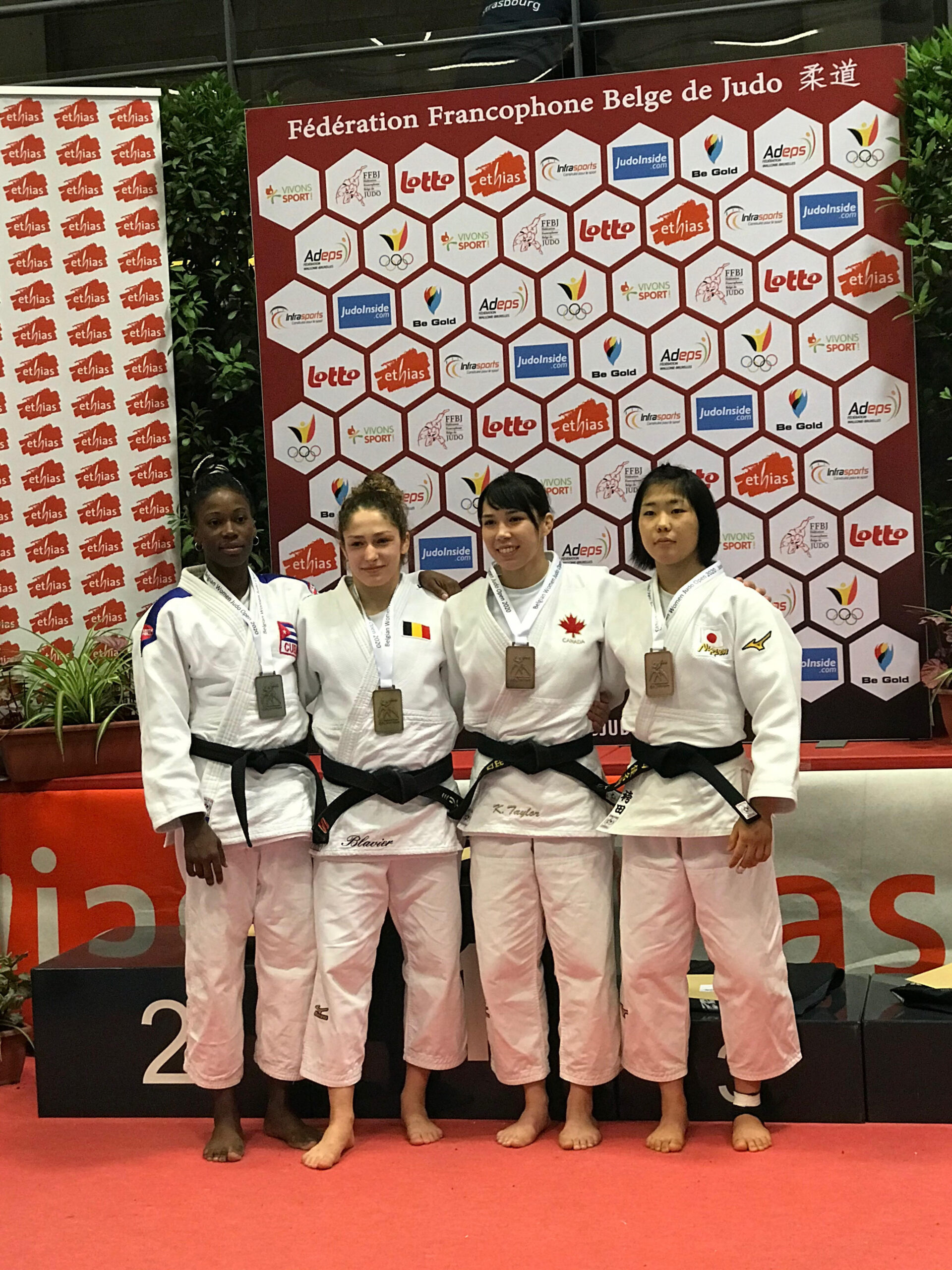 Montreal, February 2, 2020 – Kelly Taylor (-57 kg) led the day on Sunday at the Adidas International Belgian Open held in Herstal and Visé with her bronze medal, the third Canadian medal of the tournament.

The Canadian won her sixth bout of the tournament during the bronze-medal contest, which she won by ippon against Cuban Nahomys Acosta. “It was a great day for Kelly! She was dominating on the tatami and her performance was representative of her talent,” commented coach Jean-Pierre Cantin from Belgium.

Taylor’s only mistake happened in the third round, when she was defeated by Japanese Kanako Hakamata. “It was a very close fight and her opponent won because Kelly has three shidos. She could have won, but small mistakes made the difference,” added Cantin.

For her part, Shianne Gronen ranked in fifth place in -78 kg. After winning three of her four matches, she was up against French Mathilde Gil for the bronze-medal contest. The French took advantage of a momentary loss of focus from the Albertan near the end of the bout to win the coveted medal.

“It’s a shame for Shianne, because she was really bringing it today (Sunday)! She was leading by waza-ari, but she was caught for ippon in the last moments. I think experience played a major role,” explained the Canadian coach.

The same observation also applies to Virginia Nemeth (-48 kg), who lost her bronze-medal bout against Mélanie Vieu, from France.

“They know each other well and it was a long match during which the girls analyzed each other. There were several reprises and the French ended up winning by ippon. It was still a good performance for Virginia as she continues to gain experience.”

Nemeth ended with a score of three victories and three losses.

Coralie Godbout (-78 kg), Isabelle Harris (-63 kg) and Alexandria Lefort (-70 kg) were the other Canadians to get a ranking. Godbout ranked in seventh place, while her teammates each ranked ninth in their respective categories. Alicia Fiandor had a score of one victory and one loss in -63 kg.

After winning five matches, Quebecois François Gauthier-Drapeau led the men’s team with a fifth place in -81 kg, the best Canadian ranking of the day in Visé.

He was defeated in the bronze-medal contest by Swiss Lukas Wittwer. His only other loss of the day was against Netherlander Jim Heijman, who also won a bronze medal.

Keagan Young, Alexandre Arencibia, Jérémie Blain, and Mackenzie Morgan were also in action in the same category. Young came up with the best result with three victories. In the fourth round of repechage, he eliminated Arencibia, who had a score of two wins and two losses.

Blain and Morgan each won one out of three contests.

Fighting in -100 kg, Ian Ryder saw his day cut short after the fifth round in repechage. The British Columbian was defeated by French Kenny Liveze and ranked in seventh place. He had a score of four victories and two losses.