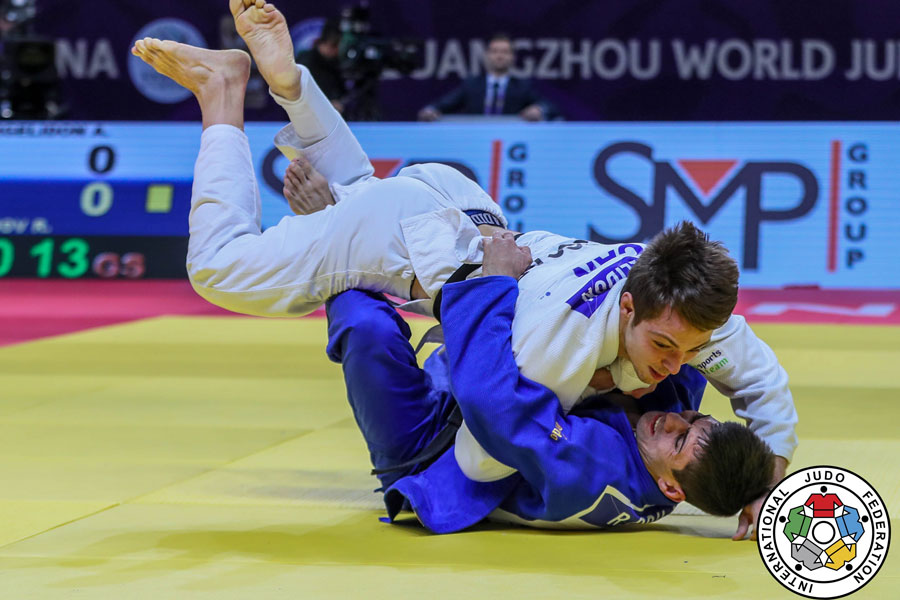 Montreal, December 15, 2018 — Arthur Margelidon (-73 kg) and Jessica Klimkait (-57 kg) both stood out on Saturday during the Masters in Guangzhou, in China. The Montrealer won the silver medal, while the Whitby-native won the bronze.

“It was a strong showing from the Canadian team on day one of the 2018 World Masters. Both Jessica and Arthur finished the Asian tour stepping on the podium. This is a big result for both players for the Olympic qualification points. It was also their first ever World Masters result,” said the assistant national coach Sasha Mehmedovic.

Margelidon had an almost-perfect day. Boosted after his wins against Israeli Tohar Butbul and Japanese Soichi Hashimoto in the preliminary rounds, as well as Mongolian Odbayar Ganbaatar in the quarterfinal, the 25-year-old couldn’t keep the winning streak going against Azerbaijani Rustam Orujov in his quest for gold. His opponent won by waza-ari in golden score.

In the finale for bronze, Klimkait defeated Brazilian Rafaela Silva, the reigning Olympic champion, who was disqualified after getting three penalties for non-combativity.

Earlier, in semi-final, the Canadian lost by ippon in golden score against Kosovar Nora Gjakova, who then won the silver medal. The gold medallist from the Osaka Grand Slam also defeated Israeli Timma Nelson Levy in the preliminaries, and Mongolian Sumiya Dorjsuren in quarterfinal.

Fighting in the same category, Christa Deguchi didn’t get a ranking. The judoka from Lethbridge was eliminated after her first fight against the now bronze medallist, Japanese Momo Tamaoki.

Catherine Beauchemin-Pinard (-63 kg), from Saint-Hubert, didn’t get a ranking after losing her first fight of the day.

On Sunday, Kelita Zupancic (-70 kg) will be the one to watch.