No medals, but quite a bit of experience 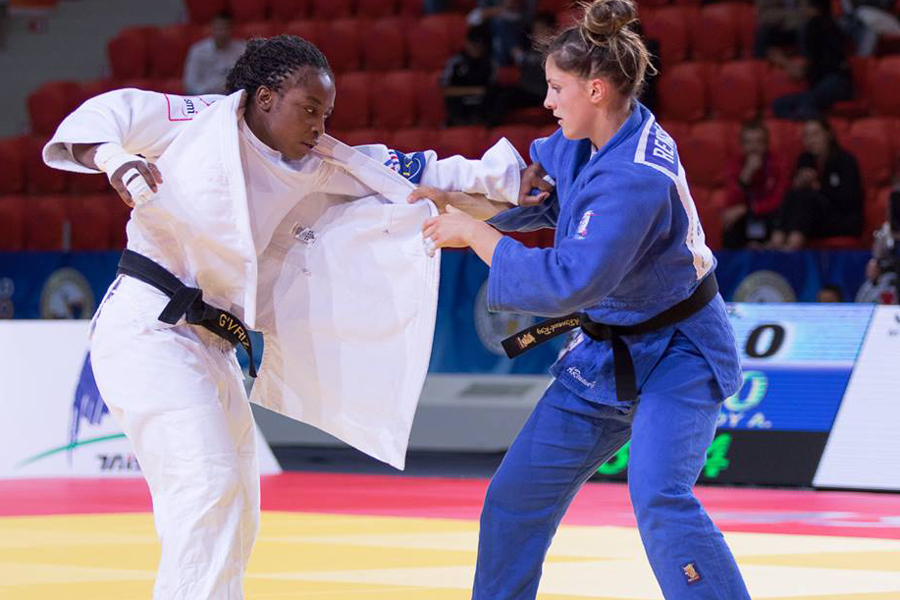 Montreal, October 18, 2015 – The Paris Grand Slam hasn’t yielded any medals for Canadian judokas. The best performance by a Maple Leafer this weekend was Kyle Reyes‘ seventh place on Sunday, in the Under 100kg division.

The 22-year-old Brampton native, ranked 22nd in the world, received a bye in the first round of the preliminaries. In his first match, both Reyes and Serbian Stefan Jurisic, 61st, took two penalties each, before Reyes scored an ippon.

Reyes’ second match was practically a repeat from the first, with a victory by ippon over Danish Frederik Joergensen, 59th. Only the number of penalties was different: one for Joergensen and two for Reyes.

His momentum, however, was halted in his third match, when Reyes lost by ippon to world’s number one judoka, Elmar Gasimov, from Azerbaijan.

The Ontario athlete then received a second chance in the repechage, but an injury kept him from facing up against Croatian Zlatko Kumric, 36th, and he finished the competition in seventh place.

“At the end of the third fight, I injured my shoulder and I had to stop, so I didn't fight in the repechage,” he said. “I beat Gasimov in Japan last year and I was pretty sure I could beat him again, because he was much more tired than me. But then the shoulder injury happened with 30 second to go… A good day until the last thirty seconds of my quarter final.”

On the women’s side, Alix Renaud-Roy reached her objective for the tournament. In her first match in the Under 70kg, against Belgian Roxane Taeymans, 35th, the 22-year-old didn’t take any penalties, whereas Taeymans took one, which eventually tipped the scale in favour of the Le Pocatière native.

“I had never fought the Belgian in a competition before, but I had an idea of what to expect,” said the world’s 29th athlete. “It was a really tight match, and I won by just a shido.”

Renaud-Roy’s second fight pitted her against English Sally Conway, 7th. While the Québécoise took three penalties, her opponent scored a yuko to eventually win the match.

“I was up against her in Croatia last spring and that time she pinned me to the ground and won a lot faster than today, when I ended up losing by a yuko and three shidos,” added Renaud-Roy, who reports being satisfied with her 1-1 log at the Paris Grand Slam.

“I followed the strategy I developed with the coach, but not to 100%,” she said. “Since this was my first time at this competition, I wanted to win at least one fight and get experience.” Renaud-Roy finished ninth in her division at her first World Champs in Kazakhstan last August.

33-year-old Catherine Roberge was also on the mat this Sunday, in the Under 78kg. The Beauport native, 31st in the world, was eliminated in her first match by Tunisian Sarra Mzougui, 40th. Roberge was penalized four times in the bout, resulting in her opponent being awarded an ippon.