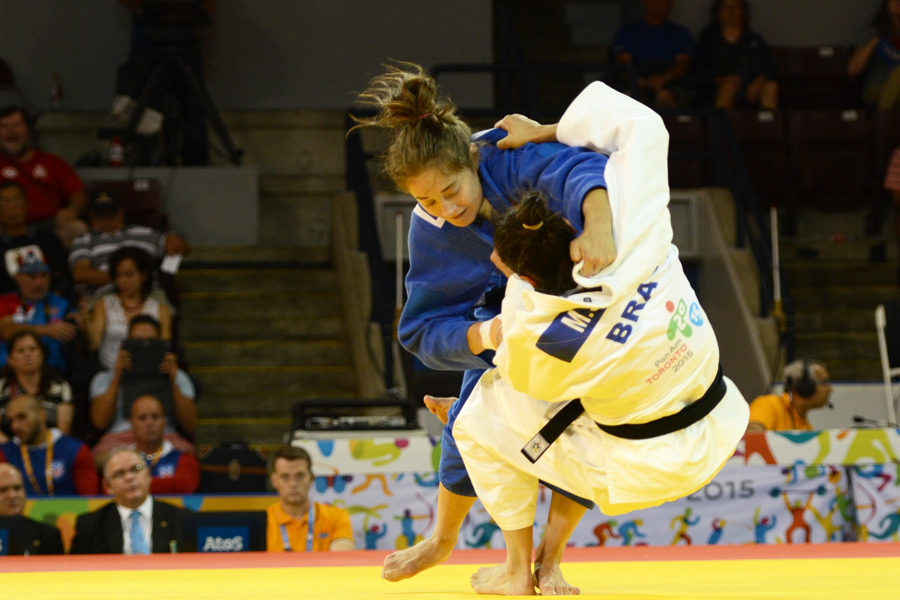 Montreal, October 17, 2015 – This Saturday’s Paris Grand Slam was not as productive a competition for Canadian judokas as last weekend’s women’s and men’s European Opens, in Portugal and Scotland. All six Maple Leafers were shown the door early on in the competition.

25-year-old Saguenay native Stéfanie Tremblay, ranked 44th in world, was eliminated by German Martyna Trajdos in the Under 63kg class. After receiving a penalty, she was served an ippon by Trajdos, 5th in the world and European champion.

“It’s unfortunate; I was off to a good start,” said Tremblay. “In the first sequence, I had an attack that I was sure was worth at least a yuko, but they didn’t give me anything for it. Then I came very close to pinning her. Unfortunately, towards the end of the fight, she managed to get in some upper body contact, which I was supposed to avoid. She ended up throwing me for an ippon.”

The competition was an opportunity for the Québécoise to realize she has to “step up her gripping technique” so she can beat opponents who are bigger than her, as every mistake comes at a high price. “It was a good enough fight against one of the world’s best,” she continued. “It’s been a positive experience overall, and I’m optimist for what’s ahead now.”

Serial Defeats for the Men

In the Under 60kg, Sergio Pessoa didn’t manage a repeat from last Saturday at the European Open, when he got his hands on the bronze. The Sao Paulo native, 72nd in the world, won his first bout, against Argentinian Hernan Birbrier, 81st. Up against world’s fifth judoka, Uzbekistan‘s Sharafuddin Lutfillaev, in his second match, Pessoa lost by ippon.

This summer’s PanAm silver medallist Antoine Bouchard, from Saguenay, also didn’t see a repeat from last Saturday. The 21-year-old, 16th in the world, lost his first match in the Under 66kg to Italian Elio Verde, 28th. In the same weight class, Baie-Comeau’s Patrick Gagné did not take part in the competition.

In the Under 73kg, the situation was very much the same. Arthur Margelidon, 25th in the world, won his first match by ippon, against Uzbekistan’s Mirali Sharipov, 42nd. Then the 22-yeard-old Montrealer lost his second match by penalties to Mongolian Nyam-Ochir Sainjargal, 208th.

“I had an alright day,” said the 2015 PanAm bronze medalist. “I beat the Uzbek in the first round, and he’s a solid opponent. Then I lost to the Mongolian, who came in third in the last World Champs. That’s pretty good, because I put up a good fight against athletes that are at the top of the class, but I’m not notching a lot of points for the Olympics!”

Also in the Under 73kg, Étienne Briand, from Sept-Îles, defeated Ivory Coast’s Rudolphe Affro, 146th, by ippon. The 22-year-old, ranked 36th, was then driven out in the second round, up against the world’s 10th judoka, Dutch Dex Elmont, in a match decided by the number of penalties.

Alix Renaud-Roy (Under 70kg), Catherine Roberge (Under 78kg) and Kyle Reyes (Under 100 kg) will be hitting the mat on Sunday.

Meanwhile, at the European Cup in Dubrovnik, Croatia, 23-year-old Saskatchewan judoka Warren Seib lost his first bout in the Under 73kg, against Croatian Dominic Sumpor, who scored a waza-ari and a yuko.