Zupancic and Margelidon in Bronze 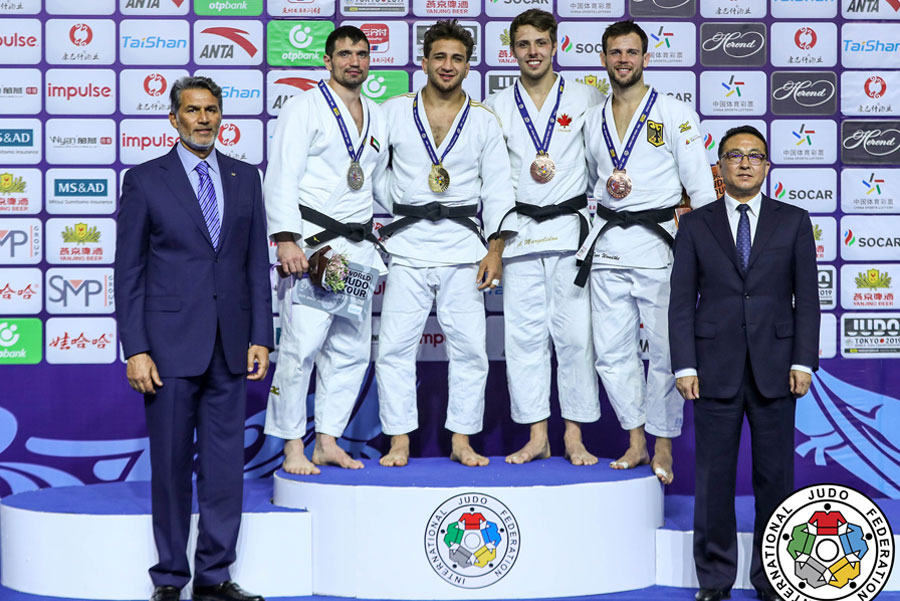 Montreal, May 25, 2019 – The Canadian team had a successful day at the Hohhot Grand Prix on Saturday. Arthur Margelidon and Kelita Zupancic both ended in third place in their respective categories.

“Today was another successful day for Team Canada. We had opportunities for more podium finishes, because some athletes ended up in 5th place. I feel today every athlete showed up to win, which is great to see. Arthur and Kelita both started off the second year of Olympic qualification with valuable points,” said the assistant national coach Sasha Mehmedovic.

The Canadian supporters were in for a great bronze-medal bout in -73 kg. Arthur Margelidon won by waza-ari against his teammate Antoine Bouchard.

“It’s always hard to be up against a friend. We didn’t really want to do it, but once on the mat, it’s like against any other opponent. We were both fighting for the same thing. We know each other pretty well, so the fight was very strategic,” explained Arthur.

The Montrealer added he wished both could be bringing home a medal, as Antoine was able to defeat strong opponents. “He still had a great day, but after losing my semi-final, we had to settle for only one medal.”

Margelidon scored 3 victories in the preliminary rounds. His only loss was in the semi-final against Victor Scvortov, from the United Arab Emirates, who won the silver medal.

“Scvortov had a very closed style, he blocked everything and I made mistakes in my choice of attacks. He fought to give me penalties. I was disqualified in golden score because of a false attack. It was my third penalty, and he only had one,” he added. His goal for this season is to win a title at the World Championships in August.

On his part, Bouchard won 2 bouts in the preliminaries, then lost the third one. In repechage, the Saguenay-native defeated German Anthony Zingg by ippon.

Zupancic Adds Another Medal to Her Collection

On the women’s team, Kelita Zupancic (-70 kg) will be leaving China with a bronze medal around her neck. She defeated a local favourite, Sun Xiaoqian, by ippon to stand on the podium.

“Winning a medal always makes a good day! My bronze medal match went as planned, so I’m happy with that.”

Earlier today, the Whitby-native had a score of 1 victory and 1 loss in the preliminaries. The Ontarian bounced back in repechage with an ippon against Greek Elisavet Teltsidou.

“I’m not satisfied with the one I lost! I was too hesitant, but the journey continues.”

Catherine Beauchemin-Pinard (-63 kg) ranked in 5th place. Japanese Aimi Nouchi won by waza-ari in one of the bronze-medal fights. In the preliminary rounds, the Saint-Hubert native had a score of 1 win and 1 loss, and won by ippon in repechage against South Korean Han Hee-ju.

Finally, Étienne Briand (-81 kg) ranked in 7th place. He ended his day in repechage, where he lost by ippon against Egyptian Mohamed Abdelaal. The athlete from Sept-Îles also won 2 out of 3 fights in the preliminaries.

“Catherine, Antoine and Étienne fought with a lot of heart today, but they just missed out on podium finishes,” commented Mehmedovic.

The tournament will continue on Sunday with Shady El Nahas and Kyles Reyes fighting in -100 kg.